Well………I’ve done it! I’ve read the last three books that I needed in order to complete my Book Bingo card. I didn’t expect to finish the whole card but I have and I’m delighted.

So which three books did I choose?

I needed to read a book “set in another country” and chose another Agatha Christie….A Caribbean Mystery. It’s a Miss Marple story and if you can forgive the, perhaps, racist comments about the native Caribbean folk, is good read.(It was first published in 1964 when people could get away with being dismissive of anyone who wasn’t white, middle class and Christian) Half way through the book I realized that I’d seen a television film of the story but I’d forgotten the ending so it didn’t spoil the book.

For”A book not originally written in English” I read Finn Family Moomintroll by Tove Jansson. This is a children’s book though I’m not entirely sure what kind of child it’s aimed at! I obviously don’t have the kind of imagination need for stories like this because although charming in parts it 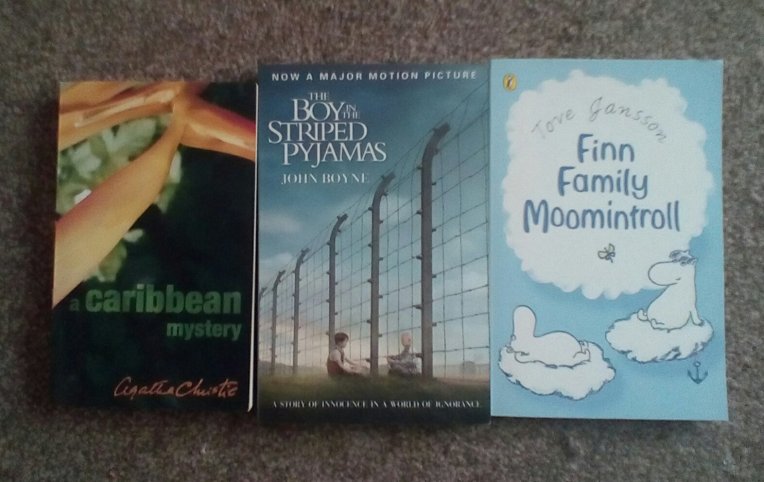 became so surreal that I began to wonder if someone had slipped some hallucinatory drugs into my tea!

I’ve seen the film which I thought was excellent but the book is magnificent. It’s a book that everyone should read (probably more than once) It should be on the syllabus of every school. If you haven’t read it then go to your nearest bookshop TODAY and get a copy, get a couple of copies and give the others to friends..

So my Book Bingo card is full and I’m in with a chance of having my name drawn out of the hat to win……..I’m not sure what the prize is and as Book Bingo was Phil’s idea in the first place I probably shouldn’t accept the prize even if I did win!! It’s been a lot of fun, I’ve read stuff that I wouldn’t normally read, some hasn’t been so good (the graphic novel comes instantly to mind) but the majority has been excellent, poetry, chick-lit, children’s books, from the teenage section, not originally written in English. More people than expected have taken up the challenge to play Book Bingo, far more than expected have actually finished. More people are using our lovely little community Library, more books are being read, people are talking about stories, authors, the different categories of books, making recommendations etc…….oh and we’ve collected some money in order to be able to buy new books. Will we do it all again again next year……well, I think we would be silly not to!